Walking was the main method of transportation until humans domesticated, or tamed, animals. Camels, horses, and cattle then carried goods and people. More than 5,000 years ago people invented the wheel. This allowed animals to pull carts. Ancient peoples also traveled by water, at first with simple dugout canoes and rafts.

The Persians built a system of roads in the 500s bce. The ancient Egyptians, Indians, and Chinese also built roads. By the 200s ce the Romans had built roads across Europe.

Transportation by water expanded in the Middle Ages (500–1500 ce). New ships were built with multiple sails. They were able to travel farther and faster than earlier ships that were powered by rowing. Improvements in navigation made it possible to sail farther from land. Voyages of discovery in the 1400s and 1500s opened up trade routes between distant points. 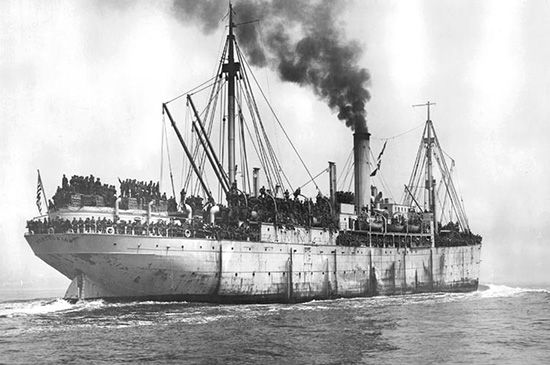 The invention of the steam engine in the 1700s was an important event in transportation history. Steam-powered boats could easily travel upriver. Steam-powered ships could cross oceans without wind. On land, inventors used steam engines to power locomotives. This led to the growth of railroads. By 1869 a railroad ran across the United States, and steamships regularly crossed the Atlantic Ocean. Trips that had taken weeks now took days.

The late 1800s saw the first successful bicycles and automobiles. They made quick and easy transportation available to more people than ever before. People who bought cars demanded more and better roads.

In 1903 Wilbur and Orville Wright flew the world’s first airplane. The invention of the jet engine in the 1940s made air travel the fastest transportation in history.

Advances in transportation have led to problems, however. Cars and trucks cause traffic jams, accidents, and air pollution. These vehicles also use oil for fuel. The supply of oil is limited and controlled by a few countries. To ease crowded roads, governments have worked to improve public transportation. To fight pollution, scientists are developing vehicles that run on different types of fuel.

The modern automobile is a complex technical system employing subsystems with specific design functions. Some of these consist of thousands of component parts that have evolved from breakthroughs in existing technology or from new technologies such as electronic computers, high-strength plastics, and new alloys of steel and nonferrous metals. Some subsystems have come about as a result of factors such as air pollution, safety legislation, and foreign competition.

Passenger cars have emerged as the primary means of family transportation, with an estimated three-quarters of a billion in operation worldwide. One-quarter of these are in the United States, where some three trillion miles (almost five trillion kilometres) are traveled each year. In recent years, Americans have been offered hundreds of different models, about half of them from foreign manufacturers. To capitalize on their proprietary technological advances, manufacturers introduce new designs ever more frequently. With more than 50 million new units built each year worldwide, manufacturers have been able to split the market into many very small segments that nonetheless remain profitable.

New technical developments are recognized to be the key to successful competition. Research and development engineers and scientists have been employed by all automobile manufacturers and suppliers to improve the body, chassis, engine, drivetrain, control systems, safety systems, and emission-control systems.

These outstanding technical advancements are not made without economic consequences. According to a study by Ward’s Communications Incorporated, the average cost for a new American car increased $4,700 (in terms of the value of the dollar in 2000) between 1980 and 2001 because of mandated safety and emission-control performance requirements (such as the addition of air bags and catalytic converters). New requirements continued to be implemented in subsequent years. This is in addition to the consumer costs associated with engineering improvements in fuel economy, which may be offset by reduced fuel purchases.

Vehicle design depends to a large extent on its intended use. Automobiles for off-road use must be durable, simple systems with high resistance to severe overloads and extremes in operating conditions. Conversely, products that are intended for high-speed, limited-access road systems require more passenger comfort options, increased engine performance, and optimized high-speed handling and vehicle stability. Stability depends principally on the distribution of weight between the front and rear wheels, the height of the centre of gravity and its position relative to the aerodynamic centre of pressure of the vehicle, suspension characteristics, and the selection of which wheels are used for propulsion. Weight distribution depends principally on the location and size of the engine. The common practice of front-mounted engines exploits the stability that is more readily achieved with this layout. The development of aluminum engines and new manufacturing processes has, however, made it possible to locate the engine at the rear without necessarily compromising