The future of 48–V/12–V battery systems in automobiles now lurks just around the corner. Most major automobile manufacturers across the globe have been working on proving out their systems for the past few years, and it’s evident that their implementation will be relatively near term. This is a necessary and crucial step in the long and arduous journey to the fully autonomous passenger vehicle, which doesn’t require a human at the controls and has true autonomous driving.

Nevertheless, this doesn’t mean the 12-V battery is going away—there are far too many legacy systems in the installed vehicle base for this to occur. What it does mean is that autonomous cars will have both a 12-V battery and a 48-V battery (Fig. 1). 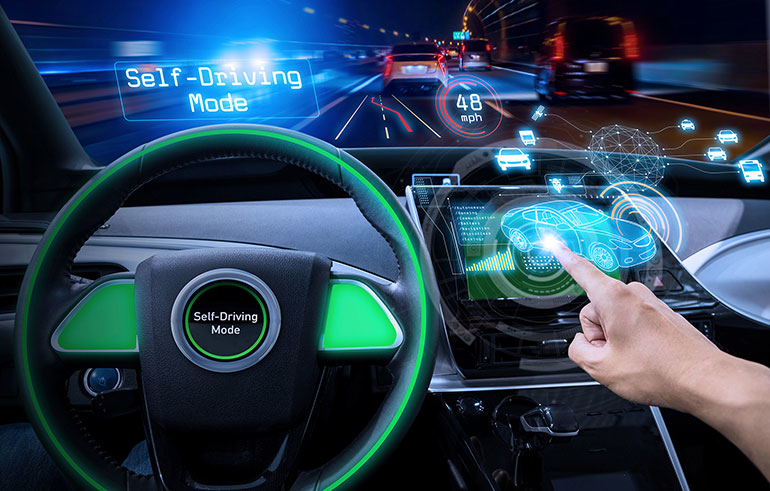 A vehicle’s internal systems will either run off the 48-V lithium-ion (Li-ion) battery or the 12-V sealed lead-acid (SLA) battery—but not both. In addition to having two separate charging circuits for these individual batteries due to their respective chemistries, there must also be a mechanism that enables charge to move between them without causing any damage to the batteries or any system within the vehicle. An added benefit is that having two batteries also allows for redundancy should one of them fail during operation.

While this certainly complicates the design of the various electrical subsystems within the vehicles, there are some advantages to be gained. According to some auto manufacturers, a 48-V-based electric system results in a 10% to 15% gain in fuel economy for internal combustion engine vehicles, thereby reducing CO2 emissions.

Moreover, future vehicles that use a dual 48–V/12–V system will enable engineers to integrate electrical booster technology that operates independently of the engine load, thereby improving acceleration performance. Such compressors are already in the advanced stages of development and will be placed between the induction system and the intercooler, using the 48–V rail to spin-up the turbos.

Globally, fuel-economy regulations have been tightening, while autonomous-driving capability with connectivity continues to proliferate in new automobiles. Accordingly, the 12-V automobile electric system has reached its usable power limit. As if these changes aren’t already enough, there has been a significant increase in automotive electronic systems. These changes, coupled with related demands for power, have created a new spectrum of engineering opportunities. Clearly, the 12–V lead-acid battery automotive system with its 3–kW power limit must be supplemented.

Furthermore, new automobile standards impact how these systems need to work. A newly proposed automotive standard, known as LV 148, combines a secondary 48-V bus with the existing automotive 12-V system. The 48-V rail includes an integrated starter generator (ISG) or belt start generator, a 48-V Li-Ion battery, and a bidirectional dc-dc converter, which can deliver tens of kilowatts of available energy from the 48- and 12–V batteries. This technology is targeted at conventional, internal combustion automobiles, as well as hybrid electric and mild hybrid vehicles, as auto manufacturers strive to meet increasingly stringent CO2 emission targets.

The implementation of an additional 48-V supply network into vehicles isn’t without significant impact. Electronic control units (ECUs) will be affected and must have their operational range adjusted to the higher voltage. In addition, this will necessitate that manufacturers of dc-dc converters introduce specialized ICs to enable these high-power energy transfers with very high efficiency to conserve energy while simultaneously minimizing thermal design aspects.

The need for a bidirectional step-down and step-up dc-dc converter that goes between the 12- and 48-V batteries is clearly required. Such converters could be used to charge either of the batteries while simultaneously allowing both batteries to supply current to the same load if required in the system.

From a legacy perspective, these initial 48-V/12-V, dual-battery, dc-dc converter designs used different power components to step-up and step-down the voltage. To address the requirements of dual batteries, manufacturers have introduced bidirectional dc-dc controllers that use the same external power components for step-up conversion as they do for step-down conversion.

The direction of the power flow is automatically determined by the controller or can be externally controlled. Integrated input and output protection MOSFETs for the V1 and V2 terminals protect against negative voltages, control inrush currents, and provide isolation between terminals under fault conditions such as switching MOSFET shorts.

In step-down mode, the protection MOSFETs at the V1 terminal prevent reverse current. In step-up mode, the same MOSFETs regulate the output inrush current and protect themselves with an adjustable timer circuit breaker. In applications such as battery-backup systems, the bidirectional feature allows the battery to be charged from either a higher or lower voltage supply. When the supply is unavailable, the battery boosts or bucks power back to the supply.

Masterless, fault-tolerant current sharing allows any controller in parallel to be added or subtracted while maintaining current-sharing accuracy. Each controller regulates to the average output current, eliminating the need for a master controller and providing higher load current, better heat management, and redundancy. Internal and external fault diagnostics and reporting are available via the fault and report pins. When an individual controller is disabled or in a fault condition, it stops contributing to the average bus, making the current-sharing scheme fault–tolerant.

To meet stringent automotive standards and efficiency requirements, dual-battery controllers need to provide bidirectional capabilities that simplify overall power system design. Higher levels of performance, control, and simplicity can be achieved with 48-V/12-V, dual-battery, dc-dc automotive systems by allowing the same external power components to be used for step-down and step-up purposes. They enable operation on demand in buck mode from the 48-V bus to the 12-V bus or in boost mode from 12 V to 48 V.

When starting the car or when additional power is required, these controllers enable both batteries to supply energy simultaneously to the same load. This gives power-conversion designers a feature-rich, bidirectional converter that can easily configure 12- and 48-V battery systems, which will be required for the fully autonomous vehicles of the near future.