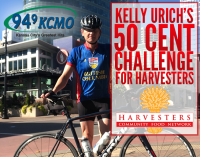 
CUMULUS Classic Hits KCMO/KANSAS CITY morning host KELLY URICH will ride his bicycle 100 miles starting TODAY (4/10) at 9a (CT) to help feed the hungry in KANSAS CITY. Earlier this week, URICH challenged his listeners to pledge 50 cents for every mile he rides. KANSAS CITIANS raised over $6,000 in just a few hours. He will start and end his 100 mile ride at Union Station.

URICH said, “Anyone who listens to our show knows I’m lucky to have a job, so this is the least I can do. And HARVESTERS! How can you say no? Cycling is one of the few social distancing activities you can do, so I’m thrilled to combine my passion for HARVESTERS and my favorite sport. I’ll ride as hard as I can! Thank you to everyone who has given so much and to everyone who helps us promote this worthy cause.”

Part of the problem: The MTA entered the coronavirus pandemic already saddled with financial challenges. When Cuomo signed off on the budget in January, the MTA still hadn’t finished $15 billion in projects from earlier capital plans.

“There is…carryover work from the 2015-19 capital program where the contracts have yet to be awarded,” said Penner, who led the Federal Transit Administration’s New York office for 31 years. “They are legally bound to award those contracts.”

When you add in the old projects and the new ones, the MTA’s capital plan is closer to $70 billion, said Andrew Rein of the Citizens Budget Commission.

Looming over everything is the debt the MTA holds.

The the transit administration pays a dollar in interest on its loans for every six dollars it takes in, said Danny Pearlstein of the Riders Alliance.

It also doesn’t help that the MTA depends heavily on the municipal bond market to finance its projects. Officials had hoped that $25 billion in bond sales would provide its largest funding source for the capital budget. But as yields rise sharply, experts fear investors will abandon these bonds, and the MTA won’t be able to pay its obligations.

“A big part of what happens to the capital plan is what happens to bond yields,” said Nicole Gelinas, a senior fellow with the Manhattan Institute. “Do they have to pay slightly higher interest rates to access the market, and does that mean they need to pay more for the capital improvement plan?”

The MTA’s revenue projections for the 2020-24 capital improvement plan also depend on its operating budget—fares, tolls, real estate taxes, sales taxes, and city and state subsidies. But those are affected by the widespread disruption caused by the coronavirus and the uncertain timeline for when the economy will return to normal.

“They’re counting on $3 billion in revenue, and it’s totally naive to believe this is going to happen,” Penner said.

MTA officials also counted on an additional $15 billion from Cuomo’s controversial congestion pricing legislation. The significant decline in New York City traffic since the outbreak of the coronavirus, with no clear indication of when typical traffic patterns will resume, present a clear threat to the project.

What’s more, the congestion pricing plan has yet to gain federal approval by the Department of Transportation, primarily because of the Trump administration’s concerns over the plan’s environmental impact.

“A lot of questions are up in the air,” said Gelinas, noting the future tax base of the city and the willingness of individuals and businesses to shoulder a novel congestion charge are unknowns.